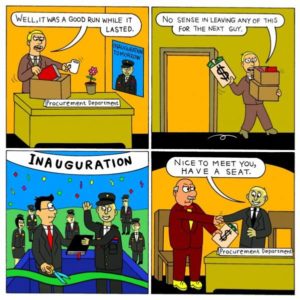 Recently, I have been reading and blogging on a number of different papers, guides and articles that deal with the challenges of foreign bribery and third party intermediaries. While each work has been interesting, compelling and relevant, there are some common elements that warrant further discussion. One such issue which presents a difficult challenge from a number of anti-bribery perspectives is the issue of regime change, and how governmental turnover impacts the long-term assessment and vetting of third parties, specifically, governmental intermediaries.

The issue of governmental turnover can be evolutionary or revolutionary, with a continuum of variations; however, regardless of how a regime might “change hands,” the potential impact on a third party in terms of corruption, is quite similar. As the recent Kroll and Compliance Week “2014 Anti-Bribery and Corruption Benchmarking Report,” states, “taming third-party risks continues to be a major weakness for anti-corruption programs, and the problem may well be getting worse.” * Furthermore, when you analyze the impact of regime change as a potential hazard in third party assessment and long term monitoring, the challenges become even more complicated.

Why would regime change present a risk factor?

Broadly, regime change can be a turnover in government, from an orderly transition through a democratically elected leader and party, to violent revolution, and all the permutations in between. However, when discussing regime change in the context of foreign bribery, I think of countries that experience regime change and where the institutions of purchasing and decision-making are weak.

As Mr. Matteson Ellis states, in such cases “the lack of credible institutions can encourage impunity,” and “bribery thrives when there are not effective institutions to expose, investigate, judge and penalize it.”** It reminds me of a conversation I had with someone who was sharing the struggles of doing business in a South American country due to the formation of a “corruption commission.” When I asked how he was going to deal with such a commission, he answered “through corruption.”   Yes, that is what he said!

So, what are the signs of weak state institutions in the context of regime change? I will start with Mr. Ellis (and thank him again for his thought contribution) who broadly defines them as those “which complicate the ability of governments to administer a wide variety of complex government regulations that apply to business.” I would also add the following:

1. Where a majority of personnel who occupy civil positions throughout the bureaucracy are terminated and replaced post-regime change.

2. Where the procurement process is suspended (temporarily or long-term) during regime change, and where purchases are either cancelled or stalled indefinitely. Transparency International (TI) has a very well defined chronology of procurement as planning, bidding, bid-evaluation and implementation and monitoring. *** When any of those four processes are haphazardly delayed or terminated, that is indicative of weak state institutions.

3. Those places where personnel who are appointed to the ministries and the bureaucracies are not trained, are poorly compensated, and who have no background in their selected appointments, e.g. purchasing, inspecting, etc. As the TI guide states, “where procurement officials are poorly paid, badly trained or lacking a viable career path the risk of corruption increases.

4. Where the rules of procurement and the tender process are poorly defined, subject to haphazard change, and where there is a confusing protocol of “official” signatures that are required throughout the procurement process.

5. Regions or countries where political change comes quickly, and there is not only a turn over in regime, but in the system of government, and this can take many forms. We can look at the recent regime changes in Libya, Egypt and the Ukraine, as examples of where prior state institutions are actually dissolved as new leaders seek to restructure the entire bureaucratic landscape.

Accordingly, when these trends exist, every time a regime changes, the procurement and staffiing process starts anew. In other words, procurements are stalled, existing orders are cancelled, new signatures are required, and recently appointed officials, who have little background or training in their field of appointment, are seated.

So, what does this mean for foreign bribery?

As Mr. Ellis describes, where you have an unstable state institutions combined with unclear and “complex regulatory regimes,” companies must often rely on “third party agents to get things done.” The challenge of regime turnover in this environment is that when a government changes hands and the institutions of state are weak, the nature of the relationship between a third party intermediary and appropriate governmental officials can dramatically change. Such new “connections,” affiliations, and interactions can present great peril for companies trying to maintain a compliant network of third parties relationships that provide a suite of legitimate business services.

It is about the touch points

When regimes with weak institutions change power, the touch points between an intermediary and government officials will also turn over as prior contacts are replaced with new “touch points” once new personnel are appointed. Thus, taken at the extreme, a properly vetted intermediary that has been providing legitimate business services during a prior regime might now have contacts in power that will work corruptly with that same intermediary in the new regime. Hence, the political and corporate exposure to corruption via the new public officials now changes the nature of those services from legitimate to corrupt, or perhaps both. While one might argue that a third party who goes from “legitimate to corrupt” should not have made it through the vetting process from the start (a valid observation), the possibility that an intermediary might change his position on the “continuum” of corruption due to regime turnover should be taken seriously.

I recall a conversation with a third party, doing little business at the time, and who referenced a “just wait” mentality, stating that once the opposition took power in a few months, newly formed corrupt relationships would bring results. He said that the new procurement officials, upon taking their place in the bureacracy, understood that “they only had only have a few years to make their pension.” In other words, a change in regime can dramatically increase corruption risk, with the potential consequence that today’s “clean” intermediary could become tomorrow’s “corrupt” one, as new governmental relationships comes into play with respect to future business and transactions.

Thus, bribery risk is not necessarily a constant in the life of a relationship with an intermediary.  What this all means for a corporation, is to avoid surprise. As a number of compliance practitioners discuss, vetting and assessing is a long-term enterprise, and the re-vetting or periodic audit of existing third party relationships is critical. Where you have a country with a poor reputation for integrity, a volatile political system, and with weak state institutions, an automatic re-assessment of third party intermediaries as triggered by regime change, would seem to be a strong guard against future corruption risk. Regime change in such cases can be a perfect storm of corruption, and as Mel Glapion, Managing Director, Kroll, stated in their report, in such cases, companies might want to consider“sharpening the saw, and improving the processes and measuring that information that’s coming back to you.”  I would only add, do it often.