View ACI’s roundup of the top 10 anti-corruption and FCPA stories that made headlines around the world in 2016. 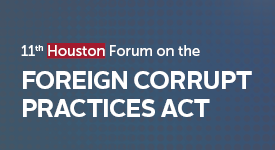